Fr. George Sears is a graduate of Fordham University, and an alumnus of St. Joseph’s Seminary in Dunwoodie, where he was granted a Bachelor’s Degree in Sacred Theology (S.T.B.), and a Master’s Degree in Divinity (M.Div.). He was ordained a priest in 2005 for the Archdiocese of New York. In his first 10 years of ministry, Fr. Sears was a parochial vicar and pastor, serving in multi-ethnic communities. Before becoming rector, he served as the vice-rector of Cathedral Seminary. 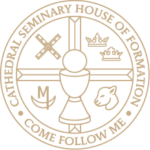 Thank you for your interest in Cathedral Seminary House of Formation. As I tell you about our seminary, I can’t help but reflect on one of my favorite passages of Scripture, which takes place on the road to Emmaus (Luke 24:13-35). After the resurrection, Jesus meets two of his disciples who are in the depths of despair because of the death of their Master. They do not recognize Jesus at first, and the Lord relates to them all the prophecies that point to His life, death, and resurrection. The disciples, being good Jews, already knew these prophecies, and yet it did not help them find hope after the death of the Lord. Not until Jesus accompanied them did they begin to understand that the Messiah had come and conquered death itself. Their hearts burned within them and they did not want the stranger in their midst to leave them. Jesus revealed Himself in the breaking of the bread and the response of the disciples was a change in course – they returned to Jerusalem to announce the Good News. Their lives changed because Jesus accompanied them.

Cathedral Seminary House of Formation is a place where men who believe they may be called to the priesthood embark on a journey of discipleship. Like the disciples on the road to Emmaus, our destination is Christ, and it is Christ Himself who accompanies us so that our hearts may be open to understand the road that He is calling us to take. Jesus is a constant companion in the seminarians’ studies, their experiences of formation with seminary formators, their relationships with brothers in community, and of course in prayer. As the Master patiently reveals Himself to each man, he also allows each man to understand who he really is and what he is called to do. Our faculty and our entire program seeks to help seminarians be ever more aware of Jesus’ presence, and engender a greater love for Him. The priestly vocation cannot be truly discerned without a genuine love for the Master in whose priesthood the ordained are called to share.

Cathedral Seminary is a house of formation – formation in discipleship, but particularly formation in preparation for priesthood. The world urgently needs good priests who will accompany people mired in the messiness of life. Jesus established the Church as His instrument of salvation. Priests in particular (and Christians in general) must never be satisfied with merely stating the truth. If that were the case, then we would be no better than the Pharisees Jesus described when he said, “They bind heavy burdens, hard to bear, and lay them on men’s shoulders; but they themselves will not move them with their finger,” (Matthew 23:4). Jesus was never content with merely telling people what to do. He accompanied the poor, the suffering, the sinners. Through personal encounter, Christ communicated that each individual mattered – that He loved them. In the Incarnation, God’s ultimate act of accompaniment, Truth is most powerfully and effectively communicated in Jesus Christ. On the way to Emmaus, the disciples knew about all the prophecies that referred to Jesus, but these prophecies only made sense when Jesus accompanied them. It was only after their hearts were set aflame in the company of the Lord, that they changed course and returned to Jerusalem to proclaim the Good News.

In preparing men for the priesthood, Cathedral Seminary seeks to ground seminarians in the truth with an integrated program of philosophy and theology, and helps men develop the communication skills necessary to relate the truth. Just as importantly, as a school of discipleship, Cathedral Seminary seeks to mold the hearts of seminarians with a desire to accompany the people they are called to serve, and so, in the words of Pope Francis, “smell like the sheep.” For the message of salvation to be received, folks need to know and trust that the messenger really cares for them and understands them. This is how the messenger becomes trustworthy. Our men are being formed so that they may be sent out to be missionary disciples, with hearts on fire with pastoral charity.

Priestly formation, and really, formation for any vocation, is meant to take place in community. The Apostles were formed for ministry through a community where Jesus was at the center. Jesus is the center of our community, continually forming us for ministry. We are a diverse, multi-ethnic house, made up of men who are just beginning college, and professionals who have had successful careers. Our seminarians come from 6 dioceses in the New York metropolitan area, and beyond. All the men, however, are united in the common goal of discernment of, and formation for, the priesthood of Jesus Christ.

Thanks again for taking the time to find out what our seminary is all about. At Cathedral Seminary, we are grateful for the opportunity to prepare missionary disciples for the priesthood. May God bless you as you continue your journey with Christ.

Sincerely yours in Christ,